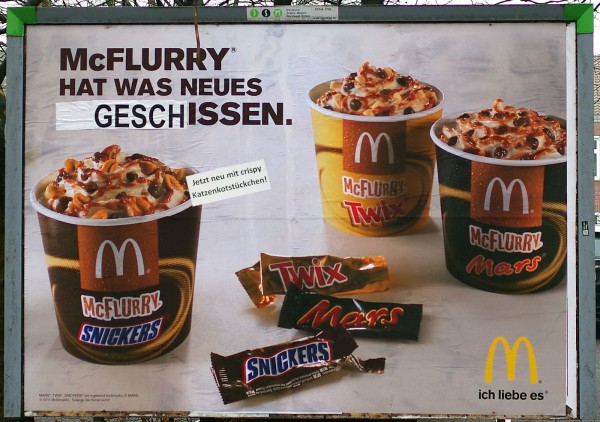 Adbusters are activist groups who distort and ridicule public advertisements by pasting over or deforming them. One of their goals is to disinform the public, often by using artistic strategies (also known as Culture Jamming). That’s why adbusting is closely related to streetart or can be seen as one of its branches.

Adbusters criticise the consumer society, commercial photography and what activists call „visual pollution“. A loud complaint is especially the lack of ad-free areas of life. Examples for adbusting are parodistic commercials or alienation of company logos, which are often spread by social media.

In 1989, Kalle Lasn and Bill Schmalz founded the Adbusters Media Foundation in Vancouver, Canada. The foundation publishes the newspaper Adbusters with an edition of 120.000. It is, of course, ad-free and financed by readers, members and activists. The newspaper deals primarily with advertisements, but also glances at consumption, social matters and international politics.

Since then, numerous social marketing campaigns have taken place worldwide. The best known is the Occupy-Wall-Street movement, which is in action for over a year now and found many international followers. But did you know there is a „Buy nothing day“ (German: „Kauf-Nix-Tag“)? This anti-consumption-day takes place in about 45 countries and is held each year since 1992. In Europe it is the last saturday in November (2012: 24th).