Lately, the artist went to the insular state of Bahrain to create a new breathtaking mural, featuring a Bahraini fisherman named Yousif, in Manama. The work is part of the Alwan 338 Festival presented by the Al Riwaq Art Space. 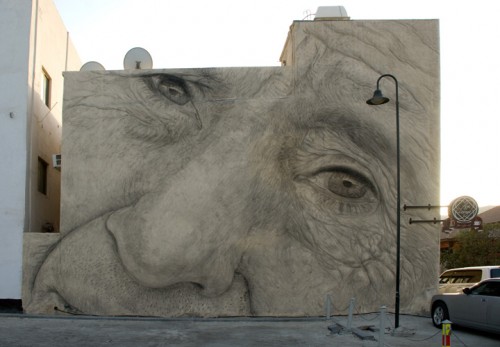 As an extra,you can see the mural’s creation process in the following video:

Quote artist:
“It is easy to make a political cartoon, but it is much more difficult to create contemporary art. There are few Bahraini artists creating profound work about this multilayered place and time. Al Riwaq Art Space is trying to change that and I have nothing but admiration for their efforts. My Identity Series murals fade away with the wind and rain. I decided to create a mural of a traditional Bahraini fisherman, one of a few hundred that are left.”