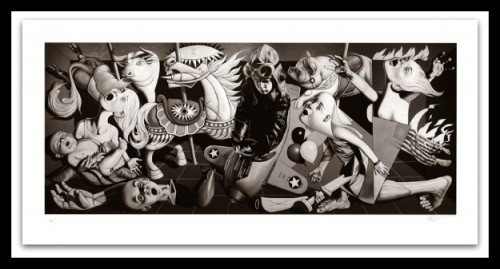 Originally conceived for display at the Station Museum in Houston, Texas during 2006, the original ‘Grade School Guernica’, 27 feet wide and 12 feet high, is one foot wider and a further foot taller than even the giant Picasso painting that inspired it. While Ron is known for over-sized pieces it’s the largest work he’s ever made.

The history behind Grade School Guernica: during the 1930s Spain became a battleground between the warring international forces of fascism and communism, and in April 1937 the Basque town of Guernica was mercilessly bombed by Germany’s infamous Condor Legion. Picasso painted his Guernica to draw awareness to Spain’s plight, and a tapestry of it still hangs in the United Nations building, New York as a constant reminder. Ron English’s interpretation replaces Picasso’s figures with kids and toys, bringing to mind not only the infantilism of violence but also the often barbarous experience of childhood.