Suben and Gestalten announce the upcoming international release of the book: 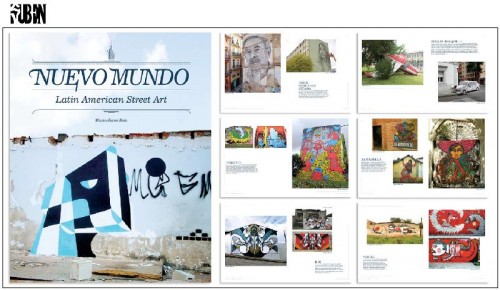 One could argue that today’s most innovative street artists come from Latin America. The unique visual styles of Os Gêmeos, Bastardilla, Vitché, Saner, Jorge Rodriguez Gerada, and others are not only highly respected in the international art scene, but their work has also been exhibited at renowned museums including the Tate Modern and Fondation Cartier.
Nuevo Mundo provides a comprehensive documentation of current street art in Latin America by exploring the full spectrum of regional scenes in their impressive diversity. The book is structured into chapters that introduce work from Argentina, Brazil, Central America, Chile, Columbia, Cuba, Ecuador, Mexico, Paraguay, Peru, Uruguay, and Venezuela.
Nuevo Mundo features not only established artists from Latin America, but also promising new talents. In addition to inspiring images, the book’s informed texts describe the history and context of the region as a whole and also give insight into each scene.
The explosive mixture of indigenous cultures, local folklore, and the history of European colonization has created a unique visual style. The high regard in which these young street artists are now held around the world is a sign of the new self-confidence of an entire continent.

Maximiliano Ruiz has explored for years the subject of Latin American street art as author, curator, and film director. Previously based in Buenos Aires, he now works from Barcelona.

A book preview can be found at Gestalten.com