Signal Gallery in association with Campbarbossa  announces the forthcoming solo show by the renowned German artist Andreas Von Chrzanowski AKA ‘Case’. Following on from successful solo shows in Los Angeles and Düsseldorf/Germany, his first London show will be an exciting event. As well as producing works for the gallery, Case will be painting a number of large street pieces across East London. 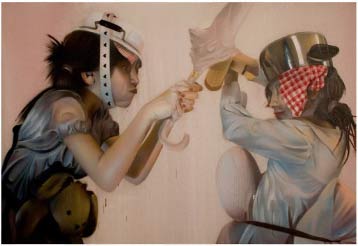 Case has been producing spectacular street pieces for a decade, primarily as a founder member of the celebrated German street art group, the Maclaim Crew. Specialising in heightened form of photorealism, several of the artists in th Clan have moved onto working individually and producing fine art works for the Gallery. Case has taken this route too, great acclaim. Developing the pioneering photorealist spray paint style of the group further in his own works, Case has produced a series of stunning detailed paintings that have made his work much sought after by galleries and collectors alike. In his solo show at Signal Gallery, ‘Never Odd Or Even’, Case is taking his inspiration from the fantastical world of Alice Through The Looking Glass.